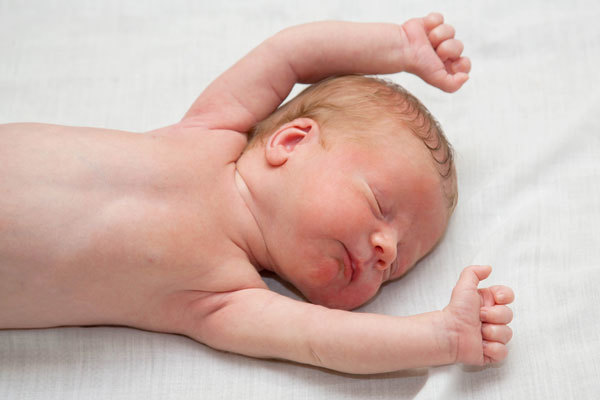 Otherwise called the startle reflex, the Moro reflex is one of the reflexes that you will observe in your newborn. This reflex is present at birth, peaks around one month, and disappears around three to four months. When your little one is startled by a loud noise, movement, or other stimulus they will react with a sudden movement or startled response: head throws back, back arches, arms and legs are extended, and hands are flexed. Then they pull their arms and legs back in towards their body mimicking a fetal-like position. The Moro reflex can be distressing to your baby and disruptive when it occurs during sleep. Swaddling your baby during sleep is often beneficial for this reason.

The Rooting and Sucking Reflex

When you stroke the corner of your newborn’s cheek, your baby will turn their head in that direction and open their mouth. This rooting reflex is designed to help a breast or bottle nipple. Once the roof of baby’s mouth is stimulated, they will start to suck. This reflex is present from birth until about four months of age.

Babies have gripping reflexes in both their hands and feet. When you place your finger in their palm, they will curl their fingers around it. Similarly, if you push on the ball of baby’s foot, their toes will curl. The gripping reflex in the hands is present until four to five months, whereas the gripping of the toes will can last until a baby is a year.

The Asymmetrical Tonic Neck reflex is also known as the ‘fencing reflex’. Turn your baby’s head to one side and you will notice that the arm and leg of that same side extend, while the opposite side arm and leg flex. Hence your baby is in a position that resembles a fencing posture.

Some thing are too good to keep a secret!

Thanks for placing your order!

Share your love for basic baby co. on social media and we will directly refund you 5% of your order. Just remember to tag us so we know who to send the refund to!

Hey! Genuine thanks for your purchase! If you’d be so kind as to share your purchase on social media, I’d be happy to refund 5% of the value of your order!

Furthermore, if anybody makes a purchase after following your link, you’ll make %5 for every sale you refer.

Get Your Shareable Link

We use cookies on our website to give you the most relevant experience by remembering your preferences and repeat visits. By clicking “Accept”, you consent to the use of ALL the cookies. Read More
Cookie settingsACCEPT
Manage consent

This website uses cookies to improve your experience while you navigate through the website. Out of these, the cookies that are categorized as necessary are stored on your browser as they are essential for the working of basic functionalities of the website. We also use third-party cookies that help us analyze and understand how you use this website. These cookies will be stored in your browser only with your consent. You also have the option to opt-out of these cookies. But opting out of some of these cookies may affect your browsing experience.
Necessary Always Enabled
Necessary cookies are absolutely essential for the website to function properly. This category only includes cookies that ensures basic functionalities and security features of the website. These cookies do not store any personal information.
Non-necessary
Any cookies that may not be particularly necessary for the website to function and is used specifically to collect user personal data via analytics, ads, other embedded contents are termed as non-necessary cookies. It is mandatory to procure user consent prior to running these cookies on your website.
SAVE & ACCEPT