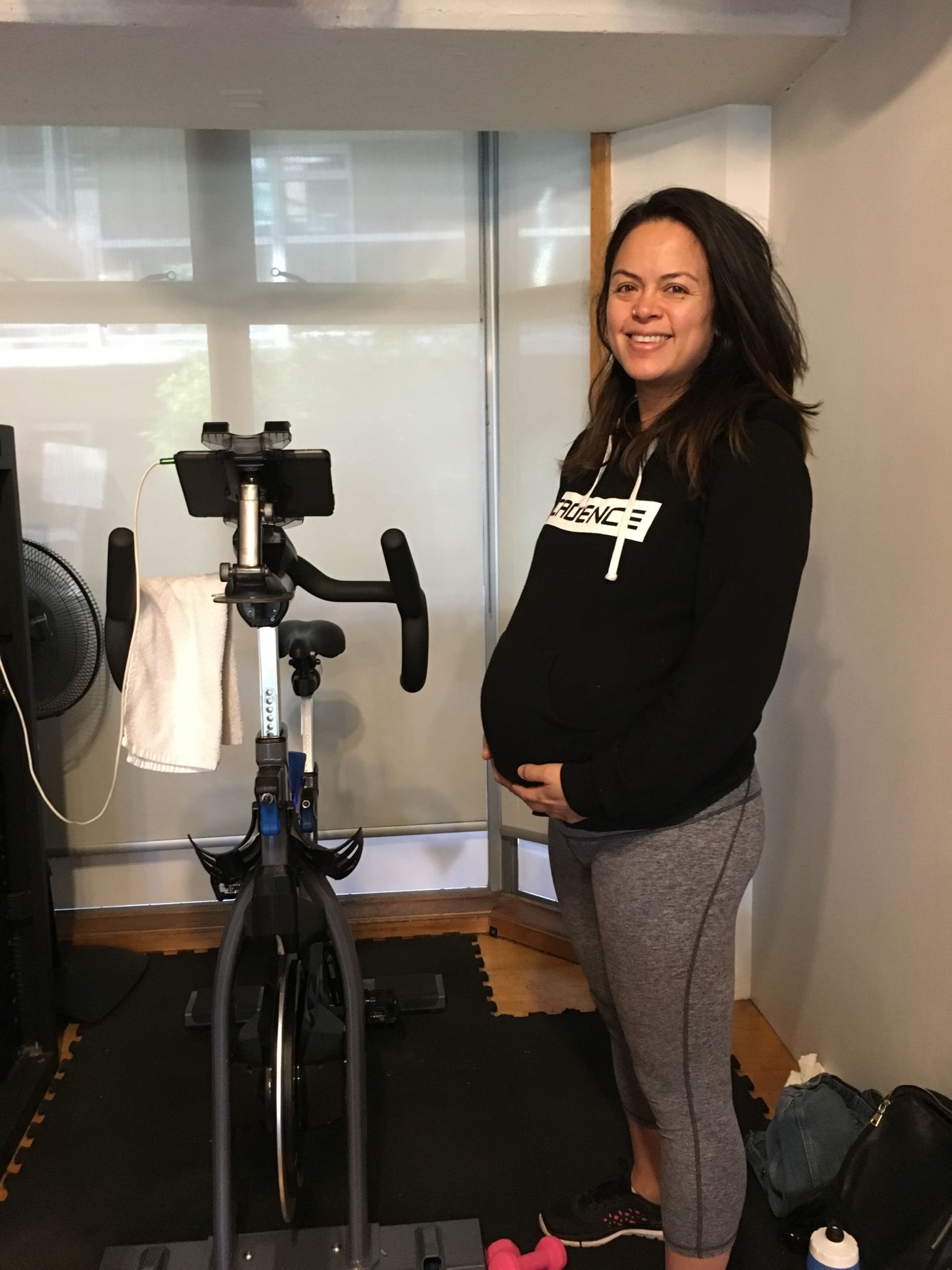 23 Oct Balancing the Baby Bump and the Bike

It goes without saying that pregnancy is a period of change, both physically and mentally. Although it can look different for many women, there is inevitably an element of unpredictability. While some women go through pregnancy relatively unscathed, it can prove to be more difficult for others, and, for many women, despite all the changes happening, responsibilities – careers, family, etc. – remain the same.

Tash is no exception. Her career is one that is physically and emotionally demanding. As both business owner and spin instructor at Cadence in Vancouver, she has a career that requires her full attention and energy, even while pregnant. When she shows up, it has to be 100% – there is no hiding behind a desk and hoping no one will notice her. Front and centre on her bike, week after week, Tash inspires and encourages rooms full of people, of all skill levels, to spin their hearts away.

I don’t know about the rest of you, but to me, this is impressive. Even without a baby bump, there are days when it is nothing more than the threat of a late cancellation fee that gets me to my spin class. So, I had to ask, how does she do it? When everything inside of her is changing, but her external world is not, how does she find the balance to make it all work? At 34 weeks pregnant, Tash was happy to sit down with me to share her experiences as a pregnant career woman and the lessons she’s learned along the way.

Amen Tash. Amen. So, rest assured this isn’t a prescriptive piece. Tash was quick to tell me that her journey, and the way she handled her pregnancy, was right for her. Her motivation to share comes from a belief that in telling our own stories, we empower others – it is an opportunity to offer ideas that people can add to their own tool box. So, even if you are not pregnant, there is no need to stop reading – I can tell you I most certainly left our chat feeling inspired, empowered, and with just a few more things to contemplate in my own journey. Tash acknowledges that pregnancy is just one part of some people’s life. More than that, she attributes her own pre-pregnancy life experiences as pivotal to giving her the emotional and mental maturity she needed to shape her pregnancy mindset.

While anxiety is not uncommon for many expecting parents, Tash was particularly susceptible. With a diagnosis of Polycystic Ovary Syndrome (PCOS), getting pregnant wasn’t easy for Tash. More than that, the doctors really didn’t know how her body would respond to it. In short, she was at a high risk for miscarriage. Although it would have been easy for her to operate from a place of fear under these circumstances, Tash refused! Recognizing that the anxiety would not do her or her baby any favours, Tash adopted the mindset that whatever will happen was going to happen and the only thing she could do was to take care of herself.

Tash made a commitment to make herself a priority. Deciding to take a holistic approach to self-care, exercising during her pregnancy was a necessity for Tash. Besides its physical benefits, as for many us, exercise was an imperative part of maintaining her mental and emotional well-being.  While there were many people that offered their often (unsolicited) advice that she should stop spinning, Tash was relieved that she had the full support of her doctor. Acknowledging that she had been living a healthy lifestyle prior to getting pregnant, her doctor’s only caution was that she not let herself get too run down.

Well, isn’t that the truth? Although there were some days when it was harder to get there than others, Tash kept spinning. As she so poignantly said, “sometimes its just about showing up…showing up for yourself”. With no option of a late cancel, Tash also believes that having others hold her accountable to her own goals made her stronger and was an important part of her journey.

Know how you want to feel and the outcome that you want to see. Be in relentless pursuit of this. It takes diligence and discipline, the kind that Tash equates to training for a race – be diligent about nutrition, sleep, and fitness, and learn to say no to what you can’t push yourself through. Besides supporting her own wellness through pregnancy, Tash believes that having this vision has also set a strong foundation for her postpartum days.

Tash is the first to admit that there were days when she overdid it. So, a big part of her pregnancy journey was learning to be flexible. However, as someone who is a high achiever and puts a lot of pressure on herself, learning to be open to the experiences and adapt was not always easy. For Tash, one of the hardest things to accept was that ‘what works for me today, may not work for me tomorrow’. This doesn’t mean that she lost sight of her vision, only that she knew she needed the tools to manage the ebbs and flows that come with pregnancy. For Tash, learning not to beat herself up for what didn’t work was key. She also learned that it is okay to allow yourself to be in that moment of disappointment, so long as you don’t give yourself permission to stay there.

Pregnant or not, a lover of fitness or otherwise, there is a takeaway here for all of us. Regardless of our own circumstances, everyone faces the challenge of how to find our balance between what is going on in the inside and the world around us.

I know that I am not alone when I wish Tash all the best with the arrival of her little one and look forward to seeing her back on the bike and leading her team at Cadence.

Some thing are too good to keep a secret!

Thanks for placing your order!

Share your love for basic baby co. on social media and we will directly refund you 5% of your order. Just remember to tag us so we know who to send the refund to!

Hey! Genuine thanks for your purchase! If you’d be so kind as to share your purchase on social media, I’d be happy to refund 5% of the value of your order!

Furthermore, if anybody makes a purchase after following your link, you’ll make %5 for every sale you refer.

Get Your Shareable Link

We use cookies on our website to give you the most relevant experience by remembering your preferences and repeat visits. By clicking “Accept”, you consent to the use of ALL the cookies. Read More
Cookie settingsACCEPT
Manage consent

This website uses cookies to improve your experience while you navigate through the website. Out of these, the cookies that are categorized as necessary are stored on your browser as they are essential for the working of basic functionalities of the website. We also use third-party cookies that help us analyze and understand how you use this website. These cookies will be stored in your browser only with your consent. You also have the option to opt-out of these cookies. But opting out of some of these cookies may affect your browsing experience.
Necessary Always Enabled
Necessary cookies are absolutely essential for the website to function properly. This category only includes cookies that ensures basic functionalities and security features of the website. These cookies do not store any personal information.
Non-necessary
Any cookies that may not be particularly necessary for the website to function and is used specifically to collect user personal data via analytics, ads, other embedded contents are termed as non-necessary cookies. It is mandatory to procure user consent prior to running these cookies on your website.
SAVE & ACCEPT